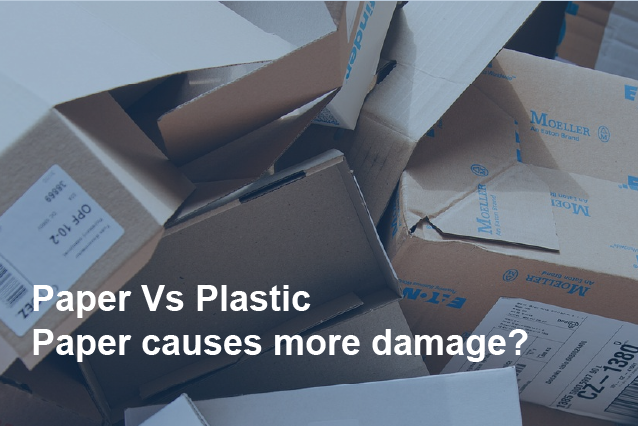 Why Plastic Isn't the Enemy

One question everyone fails to ask, why is plastic used in the first place in contrast to other solutions?

Why Plastic
Isn't the enemy..
Plastic is not the probelm
One question everyone fails to ask, why is plastic used in the first place in contrast to other solutions? Did you know raw materials for paper, glass and metals need to be mined, trees need to be cut and regrown. All of this occurs over multiple decades and if we switched to solely these, the rate at which the world consumes packaging alone would leave us with no forests within a decade.
Impacts of 'Logging' aka Deforestation for Paper:
Loss of Habitat
Did you know nearly 70% of animals, insects and plant species are found in forests, the impact of which can be told by the extinction of one animal the Bee. According to various reports if the Bee alone were to go extinct, the knock-on effect this would have is widespread famine across the globe and eventually the extinction of the human race.
According to the Food and Agriculture Organisation of the United Nations (FAO), 71% of crop foods are pollinated by bees, in Europe the percentage sits at 84%. Loss of Habitat from deforestation would however also lead to the extinction of many other species which may not have the same impact as bees, however, will likely cause famine in developing countries.
In contrast plastic is very resource efficient and its production does not consume natural resources that impact the world in the same manner and hence many years ago the decision to create & consume plastic packaging was made.
Increased Green House Gasses.
Beyond habitation the primary purpose of Trees is to absorb Carbon Dioxide in the atmosphere, so it doesn’t help when we cut them down them down, then further complain about increased gasses are destroying our atmosphere. On the other hand plastic releases methane into the atmosphere which only makes up 10% of greenhouse gasses. Let’s breakdown what these gasses are made of.
As you can see to the left, Methane, the gas released into atmosphere accounts for only 10% but only a limited percentage of that derives from plastic itself as most is derived from decomposing food, carbon dioxide on the other hand accounts for 81%. Let’s put this into context and look at the major contributors of greenhouse gasses.
1. Transportation 28%
Switching to plastic packaging can reduce this % tenfold, even Amazon has decided plastic is the more environmentally friendly solution to reduce their carbon footprint and has switched to flexibles wherever possible.
In contrast mining and logging require carbon heavy transportation, that also destroys habitats significantly. The resulting packaging products derived from them also significantly increase carbon footprints all the while being more expensive to transport too.
2. Electricity Production 27%
The second highest contributor is electricity production, guess what uses more energy to produce packaging? Paper & Tin or Plastic. You guessed it wrong its paper and tin! Mining and Logging consume vast amounts of electricity that don’t even provide a consumable raw material, further energy is required to convert them into a viable format.
On the contrary raw material for plastic is created in a more singular process, the energy used to pull fossil fuels is once again shared by various by products as well as that it only takes a singular energy investment in extraction.
3. Industry 22%
Industry accounts for 22% of greenhouse gasses these are activities that involve burning fossil fuels for energy such as heat and chemical reactions to produce raw materials. Once again, the production of plastic only accounts for a fraction of this percentage. Imagine the heat needed to mould metals and bake paper/cards and how much of it goes to waste!
Overall although plastic creates a small proportion of greenhouse gasses, it however does not reduce the natural mechanisms such as trees, that reduce greenhouse gasses which other forms of packaging do.
Water in the atmosphere
Another indirect impact of deforestation is increased water in the atmosphere. Natural landscapes help regulate the water cycle, in deforested areas there is less water available in the air that can be returned to the soil, which in turn causes barren land to occur due to famine for species living there!

Concluding this section, we have learnt that single use packaging in all forms impact the environment regardless of the material you choose. Another key take is the more waste friendly packaging material you use, the greater the environmental impact in production and transportation when it comes to traditional forms of packaging such as Paper & Metals.
The Solution, Recyclable Plastic!
- We know that plastic causes less environmental damage during production than traditional forms of packaging.
- We know it significantly reduces fuel costs and overall carbon footprint of your product during transportation
Thus, if waste is the only concern, recyclable plastic addresses all the concerns. However, like in medicine where a decision is based on where the benefits outweigh the potential impacts, one must understand why the world moved to plastics in the first place:
1. Plastic packaging provides far greater protection in transit from bumps and scuffs that renders products unsellable.

3. Plastic packaging was brought around by many companies to prevent waste by reducing the amount of spillages occurring, as it has a versatile ability to bind things together.

4. Plastic packaging provides greater preservation, did you know a banana in a flexible bag can extend itself shelf life by almost 3 days, a steak by 10 days and cucumbers up to 14 days. This allows for greater time to consume a product as well as pack greater volumes into a single pack, especially those that feature reusable zippers such as all our flexible packaging as standard.

5. Plastic also became a more prominent solution due to the ease of displaying information and creating brand visibility, but more so as porous materials such as paper can often transfer toxic inks into the product, or where metals are used they were often lined with chemicals unsafe for human consumption.

6. Plastics can be easily sterilised like their metal counterparts, thus are extremely hygienic materials, for both packing consumables and sensitive instruments which neither other forms of packaging can do.

7. Versatile, where paper and metals are non-dynamic materials, plastics can be transformed or created relatively easily to full fill the exact needs as of the item being packed, through thermomoulds and injections, without creating excess waste such as cutting.
We understand this can be overwhelming but we’re here to help! Book in a Free Consultation with us and we’ll walk you through all our product ranges, materials, additional options that can help you become you more eco-friendly!
Book Free Consultation